Instructional Videos on CrPC by Prof. H.P. Deshmukh [Part I] 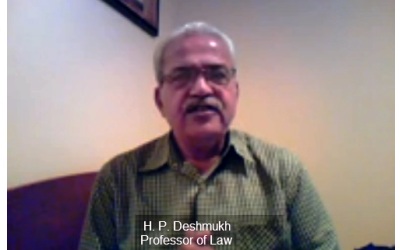 Now thanks to Professor H.P. Deshmukh, you have a reason to skip your CrPC class.

Prof. Deshmukh has uploaded a video series consisting of 54 instructional videos on the Criminal Procedure Code, 1973 and trust us, this is something you would not want to miss. The ease and simplicity with which he has explained the nuances of the Code is more than commendable! So, what are you waiting for? Go through his videos and excel in your CrPC exams [and subsequently in your career] and make him proud!

The first six videos of the series have been shared below. To see the rest of the series, browse through the options available on the first video:

Professor Deshmukh, as far as we could gather, is based in Pune and is the Academics Director at Navalmal Firodia Law College [D.E.S.], Pune.

Please do leave a comment about his videos at his YouTube page or better – write him an e-mail at prof.harish.deshmukh@gmail.com. That’s the least you can do for such a good Samaritan. Also, don’t forget to mention that you saw it first on Student at Law! Thanks.

Prof. Deshmukh has also uploaded videos on the Indian Penal Code and the Negotiable Instruments Act which have been shared in part II and III of this post.

Note: Student at Law asserts or owns no rights, including copyrights, of the above mentioned videos which have been shared from Prof. Harish Deshmukh’s channel on YouTube.